My father and I aren’t allowed to play board games together.

My father and I love games, especially the awesomely fantastically wonderful board game Cranium.  This game has everything! Sculpting, Word Jumbles, Spelling, Trivia, and Charades. 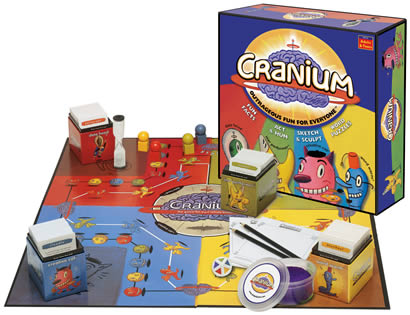 Why yes, that is angels you hear singing.

However after the Christmas 2007 incident, my dad and I are no longer allowed to play it or any other game together… really.

It all started fairly normal. Dad and I were on the same team as no one wanted to be subjected to our hardcore gaming awesomeness.

Dad: Ok if we get the charades card you will blink once if I’m close to guessing it, but blink twice if I’m far off.

Me: Got it and this isn’t cheating at all because we’re still not talking.

So I rolled the dice and got charades, we both smiled knowling at each other. I read the card, Emelia Earhart.

I stood up and held out 2 fingers.

I began my piloting an airplane simulation.

I attempted this again but making a more emphasis on the old school throttle action of flying.

I just stared at my father, while my hubby and mother roared from the other side of the table, and then finally managed to blink twice.

I changed tactics, I outstretched my arms and began running around the living room.

Shit, I blinked once and then winked, he had got part of it right.

I flapped my arms so he would understand they were out like a plane, not front like superman.

I blinked twice and then did it again for good measure. God Damn Birds!

Ok screw the plane impersonation that wasn’t working.  I decided I would attempt to sound out the Earhart part for him and held out 2 fingers.

I pointed to the second finger.

Hubby: Or she’s giving you the finger.

I blinked once, Dad looked hurt.  I ran over to Hubby blinked twice at him smacked him upside the head and ran back to dad pointing at him and blinking once.

Hubby: What the hell was that?

I took a big sniff of air, pointing at my nose and the air I was breathing in.

DUDE and Ouch, I mean my nose isn’t perfect but beak?! Really?? And again, what the hell was with him going to birds!

I blinked twice, and added a stink eye for good measure. Ok screw air, let’s go for the heart part. I slapped my hand over my heart.

Me: What the hell dad, I mean what the HELL!?

Dad: WHAT!?! You were giving me NOTHING!

Me: Nothing!?? I was handing it to you and what the hell was with the birds? I blinked twice to birds yet you were turretsing birds at me and don’t even get me started on Clinton!!

Dad: NO YOU DIDN’T!! You blinked once and winked, What the HELL was with the wink, we didn’t agree on winking!! No one could have got what you were doing!!

Mom: … um was it Amelia Earhart… and is blinking even allowed?

I blinked once at dad with a smug smile.

Dad: Oh well of course your mother would have gotten what you were doing; it takes one to know one.

Me & Mom: WHAT’S THAT SUPPOSED TO MEAN?!

Hubby: Hey why don’t we just call it a do over?

After that there may have been some game piece throwing on my part, which was returned with clay being lobed at me on dad’s side.  But before blood could be drawn Mom and Hubby sent us to separate corners and Cranium was put in the trash.

I miss that game, stupid birds.

4 Responses to My father and I aren’t allowed to play board games together.