Out with the Oldish and In with the Kinda New!

It’s finally happened, I’m bored with my blog. To be honest I thought it would have happened a lot sooner.  But it’s true, I can’t spend another day looking at my blog’s… HEADER PICTURE!

HA HA! I totally had you going didn’t I?  I’m such a stinker.

Anywho, I’ve started gathering new pics to replace the current picture collage I have above. But then I said to myself:

I: Hey Myself! You can’t replace those pictures without at least telling everyone why you put them up there, kinda like saying some parting words.

Myself: Wow I, you’re totally right!

So here ya go, some quick parting words for each of these special moments that have been captured at the top of my blog this past year. 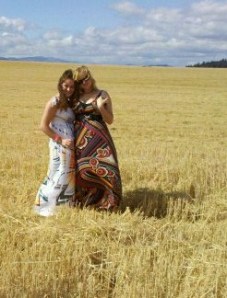 Here we have Burgandy and me standing in a field, isn’t it pretty?

We were at a wine tasting called Italy in the Valley, with our wine club. I pointed to the field and said “Oh Burg we should totally take our picture in that field!” I believe Burgandy’s response was “no”.  “But Burg it will look like art! With the yellow of that hay stuff and the blue sky and PPPPPLLLLEEEEAAASSSEEEE!” And to shut me up she agreed and she ended up LOVING this picture.

However that was not hay but newly cut straw, which if you don’t know, is as sharp as fucking knifes… and we were in dresses… ya it took a week for our legs to heal… but isn’t it pretty!? 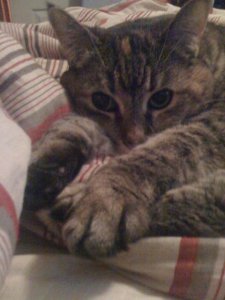 And here we have CIA Cat!

I had to include a picture of my pet/nemesis as I knew she would be the topic of MANY of my posts.

Some of the good ones, Using the Force on CIA Cat, CIA Cat Played Me, CIA Cat and the MegaColon, and CIA Cat Goes to the Vet.

Actually now that I think about it, I’m pretty sure she bitch slapped me after I took this picture.

Just for that, she will NOT be in the new collage!  Ha ha who’s the bitch now CIA Cat!?! 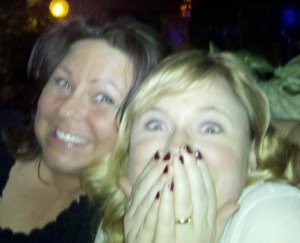 Okay to explain this picture I have to reveal something shocking… First off I know many of you have said how much you enjoy my stories regarding my friend Cheri… well it’s time to be honest with you… that’s not her real name.

I KNOW, shocking, but I thought it would be a good idea to try to hide some of my friends real identities as, let’s be honest, I blog everything they say and while that stuff is freaking funny… it can be a little embarrassing for them, perfect example Chlamydia story.

But since I stopped doing that like a month after I started blogging, I decided it’s time you all know Cheri’s real name… it’s… Sheri.  Hey I never said I was overly creative with the name changes.

So this pic is of me and Sheri… I don’t know why I look surprised, I’m pretty sure I was the one who told the person to take our picture.

*sniff* this is a picture of Zeus… *whimper* Hubby gave him to me as a gift *sob* he could hold an entire bottle of wine *sniff* I loved him so much… AND THEN I BROKE HIM!  *WAIL*

I MISS YOU BUDDY!!

Okay I included this picture cause it makes me laugh.

I can just hear this squirrel in my head.

“Dear Buddha, please bring me a pony and a plastic rocket…”

If you don’t get that reference to Serenity, aka the greatest movie ever made… you can stop reading my blog… you obviously just don’t get me.

I enjoy this beautiful view every morning on my walk into work… not too shabby.

Plus this picture captures the weather of Portland perfectly, rain clouds with just a tease of blue skies.

Anytime you’re in Portland give me a call! What’s that? You don’t have my number?… oh… akward. 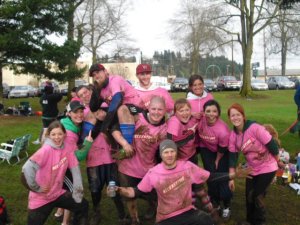 Yay! It’s my kickball team, That’s What She Said!  God I love these pink bastards!

You better believe the new header collage will have these guys in it, except we’ll be in red shirts… cause that’s the color Hosford Cup Winners wear!!!

This is a lot of empty wine bottles.

That were all drunk in one night.

No, I didn’t drink them all myself, but thanks for that vote of confidence.

This was a Bitches Be gathering that was for… um… well I don’t remember… but wow did we have a good time… I think.

This is me at my evening job.

I don’t know why the dollars are there… I think I was collecting money from the Bitches to pay the bar tab… the Bitches have a hilarious sense of humor.

Oh where to begin.

Okay so there’s this annual event in Portland called the Urban Iditarod.  It’s a race were teams of people (dogs) pull shopping carts (sleds) through a four mile course that goes all around downtown Portland. Each team has a theme that they all dress for and we all stop at bars and pubs along the race route.

My team’s name was the Maid Brigade… and yes, we were awesome. 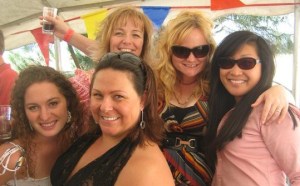 Here are more of some of my fantastic friends, and myself, still at the Italy in the Valley event.

Left to right is Burgandy on the bottom, next to her is Sheri, above her is Susan, then me, and pretty in pink is Tracy. LOVE THESE LADIES!

In this picture Sheri, Susan, and I are answering the day old question:

How do I drink my beer after just putting lip gloss on?

What? That’s a damn good question. And the answer is… STRAWS!!

And I’m not gonna lie, I saved the best for last.

I give you the Humuhumunukunukuapua’s.

The first kickball team I ever played for, so named after the state fish of Hawaii as they were mostly all (except for that cute blonde in the middle) Hawaiians.

This was an awesome team to be introduced to kickball with and, as it’s since disbanded, they will always hold a special place in my heart. YA BITCH!… inside joke, unless you watched Forgetting Sarah Marshall, then congratulations! You’re on the inside.

So there you go, you now know the story behind each picture on my header collage.  I’m hoping to have the new one up by next week, unless I get distracted, but I don’t think that will… SQUIRREL!

7 Responses to Out with the Oldish and In with the Kinda New!