OKAY!!!
5 cups of coffee… CHECK!
1 chocolate chip cookie as big as my head… CHECK!
3 piles of work on my desk that I should be doing instead up updating my blog… CHECK!
WOO HOO!! LET’S DO THIS!!

All right people, I promised you a wrap up of my holiday wonderland and here we go!

1. Ashley and I discover that there’s a PDX Browncoats association in Portland AND that they were having a Geek Holiday Craft Fair… words cannot describe the awesomeness that this is… and apparently taking photos of the merchandise and/or of you wearing the merchandise was not “allowed”… so here’s our photo montage! 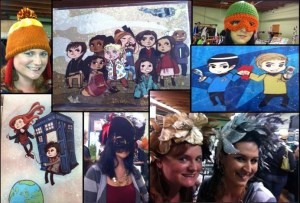 2. Kim turned smeglesnnerffde! And to celebrate her birthday we all went to our first roller derby competition… except there was no hip checking, c-blocking, crokissing, j-blocking, tripping or even whiping! WTF people!?! Kim suggested that since this match was mostly noobs, they probably weren’t fully trained in the art of making the game watchable!

Gotta love a guy that can be the only dude hanging with five lovely ladies, actually I only liked him for that, I loved him for the conversation that we had later that night;
Me: “That reminds me of a funny story when Hubby, me, and CIA Cat.. oh sorry you don’t know who CIA Cat is, she’s…”
David: “I know who CIA Cat is, I read your blog.”
Me: “… I love you Dave. Can I call you Dave? Cause I love you, Dave.”

3 The Bitches Be had their annual holiday bash.

Just once I wish my group “The Bitches Be” could go out for an evening and not get abducted, mixed up in a brawl, mistaken for the housewifes of Jersey Shore, get involved in a midget wrestling match, flash mobbed, put in a lineup, and/ or shooshed.  I really thought this was gonna be the night… it wasn’t.

It started nice enough, we went to a wine tasting… that went fine.  In fact better than fine as I had brought little mustache finger  tattoos.  Nothing says fun like mustache finger tattoos.

We opened our secret santa gifts, that went not as fine… not cool Ashley… not cool.

We then went to dinner… that went fine… until the tranny behind Amanda shooshed her… people. ya. don’t. shoosh. Amanda… It’s like shooshing me times 400.

Luckly we were able to get out with minimal destruction to property.  But word to the wise, don’t start a fight with a table full of bitches.  Especially if you’re a man.

4. The Ballet.  For some reason this year I decided I wanted to go to the ballet, not just the ballet but the Nutcracker, and not just go but get all dress up, and have martinis at some swanky little bar AND then go to the ballet.  Keeping up with my current holiday expectations versus realization, this one followed right along.

We got dressed up, that part worked at  least, and I’d show you pics but NONE of us thought to take any of us looking glamtacular.

We went to a swanky bar for cocktails, but they were full.  So we opted to sit out on the patio… by the fire… in taffeta… ya you see where this is going.

After stopping, dropping, and rolling we headed off to the ballet and sat down to watch the Nutcracker… except I didn’t… watch the Nutcracker that is.  All I could watch was the guy next to Tif who started the evening being the conductor, then he went to air playing the flute, violin, drums, and even the triangle.  The man air performed every instrument in the orchestra. HE AIR ORCHESTRAD!  I’m not gonna lie… he nailed it.

Ya I was hella sick for my big 3 5 extravaganza.  Poor hubby had planned this amazing night of karaoke bars, yummy Lebanese food, and my fav BELLY DANCERS!

But because I was so so sick… I went anyways.  HELLO!?!? I was so hoarse I was nailing notes even Barry White couldn’t reach, plus eating with my fingers is always a win, AND watching beautiful woman with tubby tummies shaking what their mommas gave them? BEST NIGHT EVER… ofcourse next morning was a different story.

What happened was Ashley, Kim, and I were going to an 80’s New Year bash just down the street from my place.  Ashley and I were VERY excited since we both always have krimpers and fingerless lace gloves on standby.

Kim and I then reappeared.  BAM!

We then hit the party, where we danced! 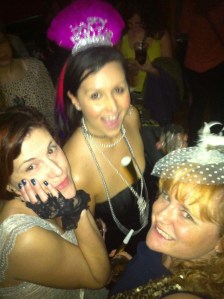 and then we drank!

And true to every great 80s movie, at the end of the night I ran home just in time to burst into the room and kiss the boy at midnight. 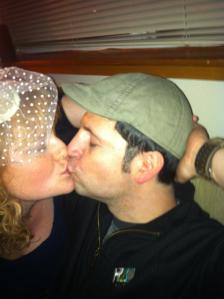