So as I mentioned in my last post, I was called in for Jury Duty, or Jury Service. Apparently, per our morning orientation from the court house spokesman, ‘Duty’ is a forced act while ‘Service’ is an honor… okay…

Anywho, I sat in the waiting room for most of the morning watching other lucky people being called up to do their “service” and I began to realize something… I may not be picked.

This was an OUTRAGE! How could they not pick me? I would be an awesome juror! I would rock that courtroom! I would be like Perry Mason, making the guilty shout out their confession just by the raise of my eyebrow. I would be like Nancy Drew, finding the truth in my stylish pencil skirt and sensible pumps. I would be like… Holy Crap… they just called my name… WOO HOO!!!

So rule number one of becoming a Juror, don’t shout out ‘Woo Hoo’ when your name is called, ‘Here’ or ‘Present’ are the more acceptable responses, and will get you fewer eye raises and frowns.  Rule number two, just because they called your name, doesn’t mean you’re automatically on the Jury.

Once in the courtroom the Judge gave us a brief description of the case; driving under the influence and reckless driving. He then asked if anyone had any experience with a drunk driver. Being the honest gal that I am, I raised my hand.

Judge: Yes Juror number two, what was your experience?

Me: *snicker* (I’m juror #2) Yes your honor sir, a childhood friend of my husband’s was killed by a drunk driver.

Judge: Would this impact your deliberation towards the defendant?

Me: Oh no your honor sir, I mean it’s not like he’s the driver that killed Hubby’s friend… although I don’t know the name of the guy that did it, but I’m pretty sure it’s not this guy, cause you know he’s here and not in jail… so ya, probably not him.

The Judge then asked if any of the Jury had family or friends that are in law enforcement. And once again I raised my hand.

Me: *giggle* (#2, it just doesn’t get old) Yes your honor sir, I have a friend that is a police officer.

Judge: Alright, when it comes to testimony being given are you more likely to believe the word of a police officer over other testimony?

Me: Hhhmmm, um ya, I would have to say I would believe the police officer over someone else, unless there was like really significant evidence proving that the police officer was lying, you know like some really obvious proof, like…. a smoking gun or something… but you probably wouldn’t have that in the court… cause you know… security and stuff… but maybe if the…

Judge: Yes, we get what you meant.

We were then herded into a waiting room while the lawyers and judge discussed their picks for the Jury.

Me: I don’t think that went well.

Dude dressed as Luke Skywalker: No way man! You nailed it! There’s no way they’re gonna pic you!!

Foe Skywalker: oh… in that case, ya you totally blew it.

I totally did, I was the first juror they dismissed when we were called back in. I was thanked for my “service” and time and told I wouldn’t be pulled for Jury Service for another 2 years, but by the way the Judge was eyeing me I’m beginning to doubt I’ll ever be pulled again.

p.s. Dude dressed as Luke Skywalker was picked to be on the Jury… 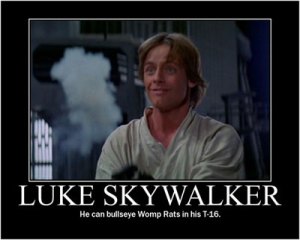 And apparently is the man you want on your Jury.