Well I had a fun weekend! I organized my closet, painted my nails, was a referee for a charity kickball tournament, almost got in a brawl with an A-Hole, and cleaned out my refrigerator.

So, which of those should I discuss in this blog post… hhmmmm… how about refereeing the charity kickball tournament? OKAY!

pssssssss, don’t worry, it involves the A-Hole too.

Saturday morning I arrived at the park bushy-tailed and chipper for a day of kickball charity fun! Which was impressive as I had to be there at 6:30am and I had been playing poker with the boys till 1:00am… don’t believe me? Look at that bushy-tailed chipperness!!!

Anywho, It had been a pretty good day.  A lot of the teams were new to kickball and were learning the rules, and everyone was having a fun time.  Even Hubby! Look how cute he is kicking that ball!! 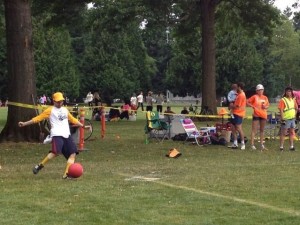 Anywho, all was going well until… the A-Hole.

A-Hole was on a team that was brand new to kickball, but obviously had a pretty competitive nature, which is fine… but dude… it’s kickball… for charity… rein it in.

So head referee Jared made a call that A-Hole didn’t agree with and shouted about it from third base. A player who was watching the game from the sidelines yelled back that it was the right call. A-Hole then yells at that player to go ‘F’ himself… okay he said something a little harsher then that, but I’m keeping this PG for the kids.

In case you were wondering, I was refereeing at first base, but my hearing is phenomenal so I was catching EVERYTHING that was being said.

Okay where was I? Oh ya, go F yourself. Well sideline guy just laughs A-hole off and tells him to calm down… he may have called him the reproducing part of a male too.

Well A-Hole is outraged by this accurate comparison and shouts back “when you’re done ‘F’ing yourself, I’m gonna ‘F’ your girlfriend.”

Sideline guy is done with talking and is now walking on to the field.  I run across the field and position myself between the two of them.

Me: GIVE ME A FUCKING BREAK! ARE YOU FUCKING KIDDING ME!? WE’RE PLAYING A FUCKING CHILDS GAME FOR FUCKING CHARITY!!

Jared takes sideline guy back to the sidelines and I’m left with A-Hole.

A-Hole: He started it!

Me: OH SHUT UP! I heard it all, and that comment about his girlfriend just got you kicked out of this game. Get off the field!

A-Hole then did something that even now makes me shake my head at the complete dumbassness of it… shut up it’s a word. He planted his feet, crossed his arms, looked down at me, and… smiled…

Me: I don’t know why you’re smiling sweetheart, this game isn’t continuing until you get your ASS OFF MY FIELD!

Me (not breaking eye contact with A-Hole, as we were currently having a no blinking contest): He’s out of this game. Unsportsmanlike conduct. Offensive language. And being a complete douche.

Jared: *cough* Mona, that’s what a yellow card does.

His team then grabbed A-Hole’s arm and pulled him off the field… which also caused him to blink…. I WIN!!!