So my parents are retiring to the country and are clearing out some of the “clutter” in their life. And apparently my GENIUS is considered clutter.

My mother sent me a box of random Mona things. It contained old yearbooks, childhood drawings, report cards, a framed photo of me with a mullet… thanks for allowing that to happen mom… and a folder full of emails I had sent my parents while at college.

The one below was sent to my parents after I had forgotten to call them for a couple of weeks. My mother had finally called me and asked if I was alive, I answered yes, she replied “good” and to check my email, and then hung up on me.

Hostile party of one?

So I checked my email and read a letter from my mother stating how I must be dead as her daughter would never ignore her parents for so long… below was my reply.

Dear Ma and Pa, (not sure why I called them that as I have NEVER called my parents ma and pa… but hey, maybe I was being whimsical.)

I am alive!!!!! I’m sorry it’s taken me so long to write back to you, but you would NOT believe what I’ve been through.

First, I got abducted by aliens on my way home from work. Luckly, Mulder and Scully came to my rescue before I got probed. (This was the 90’s people, The X-files were HUGE at this time). Although it took me a while to convince Mulder that he had to stop hitting on me and No, I would not spend the rest of my life lying on the beach and sipping margaritas with him.

But, unfortunately, on my way home from that, I was kidnapped by circus freaks and forced to join their show. My act was walking on the high wire, above a tank full of blood thirsty sharks, while reciting the alphabet backwards. Dude, that’s hard. I finally escaped after gaining the trust of Bertha the bearded woman.

Just when I thought I was going to make it home, and be able to e-mail my loving parents, I got pulled over by a State Trooper. He claimed that I matched the description of a woman who had been holding up 7-11 stores all over Washington and cleaning them out of Ding Dongs.  The Trooper described the woman as tall, thin, blonde, and having stong resemblence to Meg Ryan… I confessed.

Sadly, I was soon released and given a stern lecture by the police for impersonating a crook. But hey, I was thought to be a Meg Ryan look alike for 45 minutes and those are minutes I will never give back.

So I FINALLY made it back home and right when I walked through the door, wouldn’t you know it, but my dear ma calls simply stating to check my e-mail and then hanging up before I can tell her of my great adventure.

So… here I am…. letting you know I’m okay and thanks for worrying. But a little sympathy would be nice next time.

Much, much love your adventures daughter,
Mona 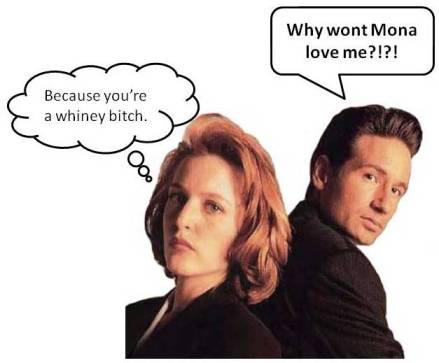