GOOGLE!!! Why Have You Forsaken Me??

I think I titled this right, I’m not quite certain what forsaken means. Pretty sure I read somewhere that Jesus said that when he was on the cross, although he didn’t say Google but Father, who happened to be God, which starts with the same 2 letters as Google and people usually go to both of them when they have life questions, but other than that the similarities end…

I’ve gotten off point, it would probably just be easier to Google ‘forsaken’ but THAT’S what ruined my weekend and made me the butt of all of Hubby’s jokes since!!!!

Okay… explaining… so Hubby and I are new to Arizona and we decided to take a car trip up north to explore. Totally out of character, Hubby took control of the trip and routed out all our stops, the wife in me was delighted, the planner in me was annoyed to no end as that has always been my job!

Anywho, our first stop was the Montezuma Castle. 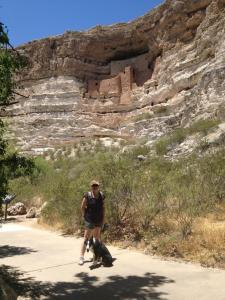 I was a little disappointed it wasn’t an actual castle, but still… pretty cool.

I tried to get Hubby to let me pick a location to visit, but I was vetod and we headed off to his next planned stop, Tuzigoot National Monument.

Again pretty cool, but we couldn’t totally enjoy it as Orko (our lovable, but stupid dog) decided to chase a butterfly off the monument. He literally jumped OFF the top wall!! Luckily, I saw it happening and yanked on his leash while he was midair causing him to come flying back, crashing into Hubby, and sending them both to the ground, they were bruised, but okay.

After this near death experience, I declared that I was taking lead of the sight seeing and would be picking our next location to visit. I scanned the map we had got at the tourist shop and saw a park called Dead Horse… sounded intriguing… so I Googled ‘Dead Horse Park’, and THIS is what Google showed me…

I shoved the picture under Hubby’s nose declaring that I had just found us the AWESOMEST spot to see.  He was impressed, and confused, wondering why he hadn’t found that when he researched our trip.  I explained that I was just more awesome than him and grabbed the map to give him directions.

15 minutes of me singing my own praise, we pulled into the park… the flat, no river, no mountain park…

Me: … I don’t understand, this doesn’t look anything like the picture.

Hubby: Are you sure that picture you saw on Google was of Dead Horse Park?

Me: Duh, of course it was, I typed it exactly… Google would NEVER lie to me.

Hubby: Let me see your phone.

I handed it to him and after a pause he got that smile on his face.  I hate that smile, it usually only appears when I have made a complete ass out of myself.

It’s been 3 days and Hubby is still making fun of me. I would plot my revenge, as I’m really good at that, but I always use Google to come up with my clever revenge schemes and we’re still not talking to each other… I wonder how long it took Jesus to forgive his father?

Dude, I am going to get so much religious hate mail for this post… I blame Google… and my parents for not taking me to church more often… but mostly Google.

Wifey, Blogger,Dog Mom, Huge Nerd, and One Hellofafriend! (Seriously, I have references). SHINY!!
View all posts by But That's For Another Blog →
This entry was posted in Humor and tagged directions, dog, dumb, god, going to hell for this one, life, love, marriage, search, wrong. Bookmark the permalink.

2 Responses to GOOGLE!!! Why Have You Forsaken Me??