GOOD GOD! Who Gave Those Women a Meetup Group!?!?!

Posted on September 4, 2013 by But That's For Another Blog

So I’ve been in Arizona for almost 3 months and have been to hundreds of Meetup gatherings…. really??… you don’t know what meetup is!?!? DAMMIT READERS!! GET IT TOGETHER!!!

Meetup.com is a site that allows you to join tons of groups that cover all ranges of activities/likes/interests/etc in your area that you can do with other “like minded people”.

Well big shocker, but I’m not meeting people with a mind like mine… this is probably a good thing.

HOWEVER! I have met someone who is close enough for me to hang out with for longer then an hour and not have an overwhelming urge to beat her senseless with a baguette! I joined a lot of eating out groups… anywho… After a long discussion together, that involved 2 bottles of wine and a jar of Nutella, we came to a GLORIOUS decision… we. were. starting. our. own. Meetup. group… BOOM! Your mind blown!!

Okay sidebar, you can learn A LOT about a person by who their top 5 are… really???… you don’t know what a top 5 is!?!?!? DAMMIT READERS!!!… actually it’s okay… most of the women who joined our group didn’t know either.

Your top 5 is the top 5 people you can be with “sexually” that your significant other would totally give you a pass on if you actually had the chance to hook up with on of the 5.

Mine are (in no significant order): Benedict Cumberpatch, Tom Hiddleston, Nathan Fillion, Andrew Lee Potter, and Mr. Darcy (past and present).

SEE! Just by those 5 names you now know SO much more about me then you did before… forget the fact that you read my blog and already pretty much “get me”.

But back to the people applying for our group, they SERIOUSLY didn’t get this question. One woman put Mother Teresa, another put her mother… no comment, someone listed her sister, and my favorite was the woman who listed herself… more power to ya sister!

So our site is up and running and we’re having our first event this Thursday, we’re doing a BYOB Painting Party… should be interesting, I’ll keep you updated. 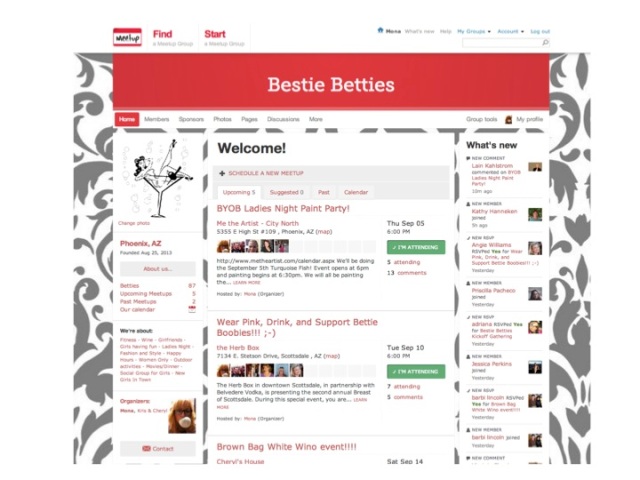 Wifey, Blogger,Dog Mom, Huge Nerd, and One Hellofafriend! (Seriously, I have references). SHINY!!
View all posts by But That's For Another Blog →
This entry was posted in Humor and tagged arizona, Drinking, famous, Friends, funny, hook up, laugh, laughing, life, sex, woman, wrong. Bookmark the permalink.

8 Responses to GOOD GOD! Who Gave Those Women a Meetup Group!?!?!