I stepped on something, almost died, and now my neighbor locks his doors.

I was raised country, which means my feet are always bare.  The minute I get home I’ll flip off my shoes and refuse to put them on again until I have to head out to join the civilized world.

In my younger days I use to keep all my shoes in the trunk of my car, so the minute I was done meeting social requirements, I could just throw my shoes in the back until needed again. However, after a flat tire incident in a rain storm that took Hubby 2 hours to fix, because of the shear mass of shoes he had to dig through to get to my spare, all shoes have since been moved into the house.

Anywho, I was enjoying my natural bare feet state while outside last night trying to get Orko to poo so we could go to bed, when it happened.  I stepped on something alive…

Now being a country girl this is no big deal, but I live in Arizona now, and the things that are outside at night are freaking freaky and want to kill me or at least seriously gross me out.

Here are the images that quickly shot through my mind. 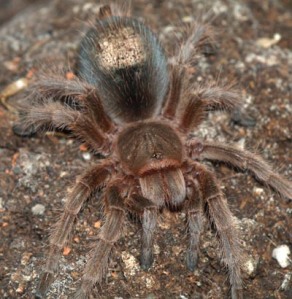 Giant Cockroach… Where are we… OH MY GOD WHY THE FUCK ARE YOU HOLDING IT!?!?!?!

Okay let’s take stock, my foot wasn’t hurting, so I was pretty certain that whatever was under my foot was either too shocked to attack, was dead, or had bit/stabbed me and I had gone numb as my body was shutting down and my death was eminent.

I raised my foot and saw him…

I had flattened a baby gecko… I WAS A MURDER!! I HAD EVEN PRAYED FOR HIS DEATH!!!

I fell to my knees and and began begging for the dead gecko’s forgiveness. Orko ran over to see what had my attention and promptly ate the gecko.

Orko cocked his head at me confused and then spat out the slobbery, squished gecko. It hit the pavement, laid there for a moment, and then took off at full gecko sprint for the hedges.

I then began dancing around with Orko jumping along with me, and that’s when I noticed our neighbor standing a few feet away holding a garbage bag. He nodded at me, I nodded at him and we went our separate ways.

Wifey, Blogger,Dog Mom, Huge Nerd, and One Hellofafriend! (Seriously, I have references). SHINY!!
View all posts by But That's For Another Blog →
This entry was posted in Humor and tagged bugs, dance, dogs, happy, Humor, laugh, life, Lizard, love, roach, spider, weird. Bookmark the permalink.

10 Responses to I stepped on something, almost died, and now my neighbor locks his doors.