It’s all fun and games until your flight loses cabin pressure and the freaking oxygen masks don’t deploy!!!

So as I mentioned in my last blog, I visited the fam a couple weeks ago and almost got taken down at the security check, But BEFORE that I almost died on the flight over… kinda… not really…

The flight started like all flights do, I boarded the plane to find that someone was sitting in my assigned window seat…

Teenage girl with headphones on happily ignoring me: ….

Startled teenager yanking out headphones: WHAT?!

Me: I think you’re in my seat…

Disappointed teenager giving me big sad eyes: … am I?…

The next interesting turn around happened on take off when I heard a… BAM! I looked around and noticed that no one else seemed to hear it, or if they did they didn’t look alarmed, so I wrote it off to me not being the calmest of fliers and got out my book.

I had only gotten through maybe a chapter when I suddenly felt myself sliding forward and my lap seatbelt tightening.  I checked the window next to the now sleeping teenager and only saw quickly moving by clouds. I again looked around the plane but, like before, no one was alarmed or even seemed to be aware of our quick descent. I wondered if this was just me being paranoid again?

Captain: Ladies and gentlemen please return to your seats and fasten your seatbelts, we will be landing momentarily.

I looked out the window and could now see that we had descended underneath the cloud layer and all I saw were mountains, pointy snow capped peaks, I DID NOT SEE AN AIRPORT OR RUNWAY AVAILABLE FOR LANDING!

I saw that the seat stealing teenager was sleeping peacefully through our demise. Maybe it was a good thing she and I had switched seats. Being on the aisle allowed me optimal “get the fuck out of here” accessibility to the emergency exits. But then I though what if she doesn’t make it and everyone thinks she’s me since she’s in my seat?  OH MY GOD! They’ll tell Hubby I had died. HE’LL BE HEARTBROKEN!!! I mean she has blonde hair and kinda looks like me, there’s a chance I could be mistaken for… an 18 year old… okay never mind.

Captain: Ladies and gentlemen we had lost cabin pressure, but we have descended to a safe altitude, and will be continuing our flight to Spokane.

… lost cabin pressure… WHERE THE HELL ARE OUR AIR MASKS!?!?

I may not be the best when it comes to paying attention during the safety talk the stewards give, but I’m pretty damn sure I remember someone mentioning how to put on your 1960’s style oxygen cup when there is A LOSS IN FREAKING CABIN PRESSURE!!

I can’t believe they didn’t drop… it’s outrageous!!…  THAT WOULD HAVE BEEN THE BEST SELFIE EVER!! 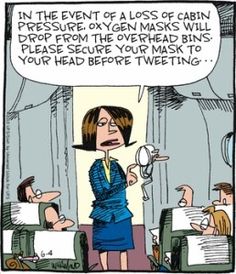 Wifey, Blogger,Dog Mom, Huge Nerd, and One Hellofafriend! (Seriously, I have references). SHINY!!
View all posts by But That's For Another Blog →
This entry was posted in Humor and tagged british, flying, freakingout, general, laugh, life, marriage, Me, oxygen, random, Safety, travel. Bookmark the permalink.